The RTA Board is a nine-member governing body made up of chief elected officials from local, state and tribal governments. Board members work collaboratively to oversee the implementation of transportation projects and transit services identified in the voter-approved, RTA plan through June 2026. The RTA Board, which meets five times a year, also oversees the fiscal management of the regional transportation plan and grants approval of RTA project schedules and budgets. Each RTA member has one vote to ensure policies and decisions are made with a commitment to drive economic growth across the region. The RTA Board includes representatives from Pima County, South Tucson, Tucson, Marana, Oro Valley, Sahuarita, the Pascua Yaqui Tribe, Tohono O’odham Nation and Arizona State Transportation Board.

The RTA Technical Management Committee is a technical and policy advisory committee that monitors the technical performance of the voter-approved RTA plan and provides technical input to the RTA Citizens Advisory Committee, which is in the process of developing a new RTA plan.

The committee includes representatives from RTA member jurisdictions and the private sector and meets as needed.

The RTA Citizens Advisory Committee provides citizen input on transportation planning efforts for development of the next RTA plan. The current 20-year RTA plan and half-cent excise (sales) tax to fund the plan, which voters approved in May 2006, are effective through June 2026.

The CAC will collaborate with the RTA Technical Management Committee on technical matters during plan development, and the CAC will recommend a draft 20-year RTA regional transportation plan to the RTA Board for approval and eventual voter consideration. The CAC meets as scheduled.

Once the CAC prepares a draft plan, the RTA will conduct broad public outreach to seek feedback on the plan before the CAC recommends a final draft to the RTA Board.

All meetings are open to the public. 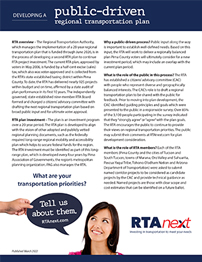